Center for Metropolitan Studies announces new board and research projects

As it approaches its twentieth anniversary, the Center for Metropolitan Studies (CEM) has announced changes to its board of directors. Eduardo Marques, Professor in the Department of Political Science at the Faculty of Philosophy, Literature and Human Sciences at the University of São Paulo (DCP-FFLCH/USP) has assumed the CEM directorship. The position was previously occupied by Marta Arretche, who is also a Professor at DCP-FFLCH/USP and will continue at the Center as a Researcher. In addition, two new sub-projects have been added to CEM's lines of research: transport inequalities and metropolitan budget governance.

There have also been other changes to the CEM board of directors. Adrian Gurza Lavalle, Professor at DCP-FFLCH/USP, takes over as Deputy Director, the role previously occupied by Eduardo Marques. Renata Bichir, Professor on the Public Policy Management programme at USP's School of Arts, Sciences and Humanities (EACH), has become a Research Area Coordinator. Mariana Giannotti, Professor at USP’s Polytechnic School (Poli), continues as Coordinator of the Technology Transfer Area, a position she assumed under the previous administration.​ 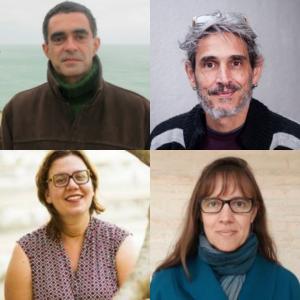 (From top to bottom, from left to right: Eduardo Marques and Adrian Lavalle,
director and deputy director of CEM; Renata Bichir and Mariana Giannotti, coordinators of the
Research and Transfer areas of CEM, respectively.
Photos: Personal Archives, except Lavalle: Fapesp.)

Mariana Giannotti also coordinates one of CEM’s new sub-projects, “Inequalities in urban transport”, which will seek to analyze and develop indicators on inequality that can better assist the formulation of public policies in the area of ​​transport, prioritizing the most vulnerable populations. Researchers engaged in this theme will test various indicators already used for transport and for other areas, such as health and education, and assess what adaptations are needed. In addition, they will explore various sources of data so as to conduct detailed, diverse and technically precise spatial and multi-scalar analysis that takes intermodality into account.

The other new sub-project is “Budgetary governance in large cities”, coordinated by Ursula Peres, Professor of the Public Policy Management programme at EACH-USP. Based on conversations developed with researchers in France and the United Kingdom, this new line of research explores the governance of municipal budgets, in close dialogue with another sub-project already underway at CEM (“Governance in large cities in comparative perspective”). The objective is to explore the main processes and actors that produce public budgets in large cities, with a focus on São Paulo, using London and Paris as ‘shadow cases’. It will also analyze the importance of the Property and Urban Territory Tax (IPTU) in the budget structure of the São Paulo metropolitan area, making comparisons with other Brazilian municipalities.

The two new sub-projects are part of the research line “Who governs what in urban inequalities?”. In addition to this, CEM develops studies along the following lines: “The role of subnational regulation in mediating the implementation of national policies ”; “The role of educational policy in reducing inequality”; and “Inequality and Political Behavior”.

In its close to 20 years of existence, CEM has published almost 70 books and more than 470 articles in national and international journals. Also noteworthy are the interactive systems developed by CEM’s researchers, such as ReSolution, a platform that offers original indicators on the Metropolitan Region of São Paulo (RMSP), DataCEM, which allows the users to consult and cross-check microdata from the Demographic Censuses from 1960 to 2010, and the Geolocalized System of schools in the São Paulo Metropolitan Area, providing information on the performance and operating conditions of public and private schools in the region. All can be accessed for free via the CEM website.

A summary of these contributions can be found on the channel Impact on CEM’s official website, one of the Foundation's Research, Innovation and Dissemination Centers (Cepid-Fapesp). CEM brings together researchers from various institutions to carry out advanced research, dissemination and technology transfer in the social sciences, investigating themes related to inequalities and the formulation of public policies in contemporary metropolises. Headquartered at USP and at the Centro Brasileiro de Análise e Planejamento (Cebrap), CEM is a multidisciplinary group, which includes demographers, political scientists, sociologists, geographers, economists and anthropologists.

"CEM occupies a prominent national and international position in research on social inequalities and well-being, especially in large cities, as well as in the production of data and support for public policies", emphasis Eduardo Marques, the new director of CEM, who had previously headed the Center between 2004 and 2009. Deputy Director, Adrian Lavalle, adds: “CEM consolidated a working model that combines the production of cutting-edge interdisciplinary and contextualized knowledge about the relationship between public policies and inequalities with the training of new generations of researchers and a commitment to transferring technology and disseminating the implications of this knowledge for the population and for decision makers.”

The new board is committed to maintaining the quality of scientific output and training of researchers that CEM has maintained throughout its history. “We will, primarily, seek to continue the excellent work developed over recent years, which combined academic excellence and analytical precision with substantive engagement in public debates and public policies”, stresses Marques. “We will also continue to expand and diversify our research and training activities for researchers, as well as modernizing our transfer operation, aiming to achieve greater agility in the dissemination of the content”, he continues.

Lavalle summarizes the objective of all members: “Working for this model to continue to be successful is the commitment and the challenge facing the new administration”, he adds. Renata Bichir, meanwhile, recalls that her links with CEM go back to her studies. “As someone who was trained as a researcher within CEM since I was an undergraduate, it is a great honor and an important challenge to foster high-level scientific discussions and to stimulate exchanges and interactions between researchers that I admire and that have contributed to shaping the debate on inequalities in Brazil”, she highlights.

Mariana Giannotti says that participating in CEM is an incredible opportunity. “I am very grateful to Professor Eduardo, who brought me to CEM, and to Professor Marta, who guided me with great wisdom, motivated me and inspired me to progress in my academic career to achieve this position”, she says. “I consider it a privilege to work with this high-quality team, which boasts theoretical strength, methodological robustness and, in particular, unparalleled generosity, transforming group interactions into a great and pleasurable learning experience. I hope to be able to give the same back to CEM”, she adds.

Marta Arretche expresses her satisfaction at her ten years in charge of the Center. “It was a great satisfaction and a huge, special and institutional learning experience to be in the CEM directorship. I consider myself a very lucky person for having managed to carry out such important projects, for having had such a qualified and engaged team, for having had the support of Fapesp ”, she declares. “I wish every success to the new team that is taking over the management of CEM, under the leadership of Eduardo Marques. A lot of good things will come”, she concludes, as she continues her work in coordinating research at the Center and also supporting CEM's communication and dissemination activities.