New book discusses the social, political, economic, and subjective life of and in peripheral spaces

Presenting a collection of studies about the district of Sapopemba in São Paulo, this book highlights the heterogeneity of peripheral spaces, the evolution of this concept over time, and the impacts of public policies in these spaces.
Janaína Simões

Periphery is a term used indistinctly by people and by the media to refer to neighborhoods that are distant from the city center and, supposedly, characterized by violence and a lack of infrastructure. As CEM's most recent publication shows, through the presentation of diverse research projects conducted in the district of Sapopemba, in the eastern zone of São Paulo, this definition is inadequate. In the real world, peripheral spaces are heterogeneous territories, in which geographic distance and the question of violence are only two aspects. Furthermore, studies indicate that the definition of peripheral space has evolved over time, and that this is not only relevant just from an academic point of view, in that this evolution has also impacted upon the delivery of public policies for peripheral spaces and their populations.

The book "Peripheral spaces: policy, violence and territory at the margins of the city" (“Espaços periféricos: política, violência e território nas bordas da cidade”), by the publisher EDUFSCar, was launched on February 12, with an online seminar including presentations by the editors - Matthew Aaron Richmond, Moisés Kopper, Valéria Cristina de Oliveira and Jaqueline Garza Placencia - and comments from the Director of CEM, Professor Eduardo Marques, who also wrote the book’s preface. The seminar was broadcasted on CEM’s YouTube channel.

Published with the support of the São Paulo Research Foundation (Fapesp), the book is structured into three main sections – The State and Public Policies, Crime and Violence, and Socio-Spatial Transformations. Its 270 pages gather a collection of research projects that use the district of Sapopemba as a case and analyze it from different perspectives. Although most of the studies were carried out by members of CEM, researchers from other institutions are also included. Most of the fieldwork was conducted between 2016 and 2018.

“Our goal with this publication was to bring together a set of studies that would allow us to identify the kinds of heterogeneity that exist in peripheral spaces today. Although Sapopemba is not an extreme case either in a geographical sense or in relation to certain indicators, such as violence, it is a microcosm that can reveal more general aspects of peripheral spaces", says Matthew. "We include several researchers looking at different research problems, using distinct theoretical and methodological repertoires to comprehend the same area", adds Valéria.

According to Matthew, the concept of peripheral space applies to neighborhoods that were originally self-constructed, with little regulation, that subsequently undergo processes of increased presence of public policies, physical consolidation and socio-spatial transformations that produce new layers in these places. "This original process remains important for understanding these spaces as distinct from the expanded center", he explains.

Moisés stresses that the purpose of the book is to think through how the social science literature in Brazil has understood peripheral spaces, using analysis from the 1960s to the present day, bearing in mind the political, economic, and social contexts in which different analyses emerged and what questions they asked. "We sought to identify different periods in which the literature focused on this theme, analyzing theoretical contributions and methodological and empirical questions for each one of the periods", he tells. "Furthermore, we analyzed the consequences of defining a peripheral space at a certain moment as being, for instance, only a relationship of geographical distance relative to the city center: what effects this has in terms of producing our view of peripheral spaces, how it helps to shape access to public policies, how subjects who inhabit these places relate to this hegemonic definition, how they resist it, what definitions they produce as a result of their experiences", he continues. 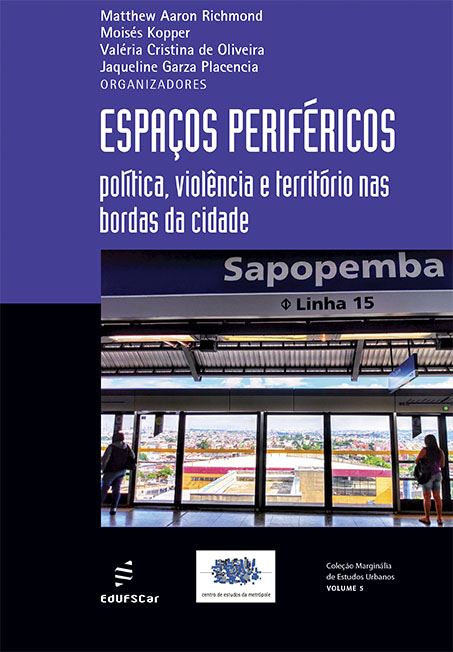 He exemplifies this by drawing on the literature that emerged during the 1980s in anthropology and urban sociology, which defines peripheral spaces based on the modes of living of resident groups, which goes against a previous definition of peripheral spaces viewed from the outside, in a top-down way, as a simple opposition in relation to the city center, and therefore as a precarious location that lacks infrastructure. "This emerging literature aims to say that there is life, there is diversity. The residents of these spaces cannot be defined by this hegemonic concept. Our attention and effort were guided towards raising awareness of how these definitions vary over time, in accordance with the social, economic and political context of each period", he affirms.

Moisés also comments that the researchers focus on how the actors, such as state agents and social organizations, are constantly trying to define what means to be in peripheral spaces, what this space is in cultural, social, economic, and political terms, and how these definitions are disputed. There are also efforts by many organizations that act within peripheral spaces whose aim is to escape the stereotypes and traditional limitations that define what these spaces are.

Sapopemba: a microcosm that represents what the periphery is

There are theorical and pragmatic reasons for choosing the district of Sapopemba. Researchers who have previously been members of CEM, notably Gabriel Feltran, Professor at the Federal University of São Carlos (UFSCar), have conducted extensive research in this district of São Paulo over many years, and gathered an impressive amount of data about the area. "This brought us closer to the field, which is crucial for research projects of this kind: gaining access, getting to know people. Moreover, this is an area that has a significant history within the debate around peripheral spaces due to level of civil society engagement, the population, the movement for improvements, the struggle for public policies in that part of the city", said Valéria.

The editors underline that, despite the focus being on a specific neighborhood of São Paulo, the discussion has a broader scope. "Our concept of peripheral spaces is not just applicable to Sapopemba. In fact, the research conducted there, taking advantage of the plurality of theoretical and methodological perspectives, contributes to a discussion that uses a core concept that is not only applicable to that location", she adds.

According to Matthew, this is a spatially heterogenous territory, giving the example of the different forms of housing it contains. "There is a history of space production that exhibits singularities, but which, in a way, can be read as a microcosm of peripheral spaces in a broader sense. There are public housing projects, housing co-operatives, more consolidated areas of self-construction, favelas", he points out.

Valéria also points out that the collection moves beyond the idea of violence as a structuring condition of peripheral spaces. "We address other topics to think about these spaces. It certainly, in some ways, runs through this context; however, it is not everything. Even chapters that are more focused on the theme of violence also involve other aspects that are substantial to the constitution of this space", she affirms. Jacqueline points out that there are two chapters that describe socio-educational assistance policies. "There are other policies that address the theme of violence, but from a different perspective that is much more concentrated on questions surrounding the implementation of policies in the territory", she concludes.

The table of contents can be accessed here, and the book is available for purchase on EDUFSCar's website. Watch the launch seminar on CEM's YouTube channel.